Today is one of the most significant days in American history! While the Declaration of Independence was signed on July Fourth, the Continental Congress actually voted to declare independence two days earlier. I’ve always enjoyed the Fourth of July holiday – who doesn’t love cookouts and fireworks – but I have to admit that in the last two and a half years independence has taken on a new meaning for us at Signature Wealth Group.

Independent but not alone

Have you ever wondered why the thirteen original colonies decided to be independent but together? My guess is they decided to join together because of compliance costs! Really though, it’s expensive to run a country or a business, and by taking “an independent but not alone approach” the colonies were able to have the best of both worlds – they were able to be part of a larger group while maintaining autonomy and local decision-making authority. They were able to share costs on larger items (especially those things they only needed every now and then) and ultimately knew that they would be better together. Signature Wealth Group offers different affiliation options: a shared services platform that advisors can leverage to grow their business and a succession plan for advisors in the legacy-building phase of their career.

Who’s Making the Decisions vs. Who’s Paying the Price

After the end of the Seven Years’ War, the British decided that it was appropriate for the American colonies to contribute to the war debt and the cost of stationing British troops on American soil. The colonists were not allowed to give input on whether or not to go to war and incur the debt, but the government decided that they needed to help pay the price. For many financial advisors today, it sounds like a familiar story – the firm they’re working with (or the bank that owns them) makes a decision that has financial or reputational costs and the advisors have to pay despite having no voice in the decision. To make matters worse, even after they begin paying the price, often their voices aren’t being heard and some firms are even leaving the protocol to (theoretically) make it harder for their advisors to find relief somewhere else! Prior to Independence Day, American colonists faced continually increased taxation, which “grid changes” always felt like to me.

During this time, while the colonists were struggling with the idea of change, Thomas Paine wrote, “The harder the conflict, the more glorious the triumph.” The same can be said for advisors today who are considering breaking free. While there may be apprehension about the potential struggle of breaking away (wondering if your clients will follow, concerns over compliance, lack of excitement about “running the business”,) I believe there is freedom on the other side of the fear.

The more I’ve researched the subject, the more I could identify with our forefathers. Three years ago, much like the original colonists, we felt we were still affiliated with a bureaucracy that no longer served us and that we no longer believed in. As advisors, we know what it’s like to feel stuck. We’ve dealt with inaction, apathy, lack of innovation and unwillingness to change. Like the patriots who fought for the freedom of our country, we’ve forged the belief in and made the commitment to the vision that we could build a better future together.

As you relax with family, friends, and fireworks this week, we encourage you to think about what professional freedom would mean to you, your family, your team and your clients. If the thought of building a community and culture of focused, growth-minded advisors comes to mind, we’d love to chat!

Have a great Fourth! 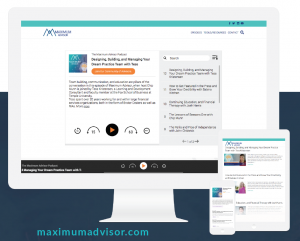